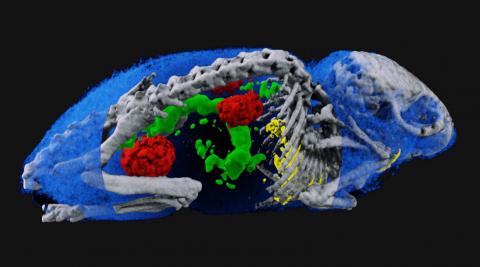 Medipix3 allows ‘colour’ imaging during CT scans, or so-called spectral imaging. By sending X-rays of different energies through the object being examined, the Medipix3 chip can detect the photons one-by-one, categorising them according to their energy, thus providing information about the density and the atomic structure of a tissue. For example, while regular non-colour X-ray images from CT scans may show the difference between bones and soft tissue, spectral imaging is better able to distinguish between different materials of similar density. This aids medical staff with diagnosis, as materials that would previously appear the same in an image can now be classified.

At present, spectral imaging has several applications on the market, but it is still in the emerging phase and has not been widely adopted. Mars bio-imaging (MBI), a spin-off from the Medipix Collaborations, is based on X-ray detectors exploiting the Medipix3. MBI has established itself as the world’s leading R&D group in spectral molecular imaging and to-date has delivered the world’s first commercial pre-clinical scanner. When combined with biological tracers attached to metal nano-particles, their scanners can allow researchers and clinicians to measure biochemical and physiological processes, modelling human diseases in animals. Although still in a pre-clinical phase, meaning that the scanners cannot yet be routinely used on humans, the MARS team has concluded that the technology will be useful in the diagnosis and treatment of heart disease, stroke, arthritis, joint replacements and cancer.

In addition to pictures with new and improved diagnostic information, MARS promises that spectral imaging will enable faster and cheaper radiology procedures while working with significantly lower radiation doses. This will considerably broaden both the value and use of Computed Tomography (CT) as a diagnostic tool, and consequently the potential of spectral imaging technologies has received a lot of attention lately from medical professionals. It is still too early to say if Medipix and MARS will be dominant players in the field of spectral imaging, but they undoubtedly offer a promising solution in this emerging field.